We're always improving. Check out what we've been up to. 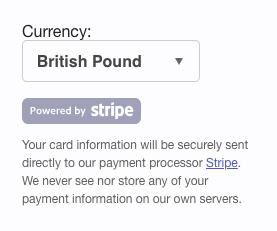 We now accept payments in different currencies! You can now pay in your native currency. We previously only supported U.S. Dollars but now we support Euro, British Pound, Australian Dollar and Canadian Dollar. This will now give you a straightforward price in your currency rather than a foreign exchange conversion from U.S. Dollars that happens later.

Get started for free!